This page can be viewed in Intelligent Game Viewer format. It requires Microsoft Internet Explorer 6.0 or greater. Many people have other platforms and browsers. Support for them is planned in the future. Second, the demo requires a module called SVG, from Adobe, to handle the graphics. You should be prompted to install it when you view the page.
Intelligent Game Viewer


Introduction: How to Attack

Attacks usually occur in the middle game, but there are many occasions where attacking opportunities arise in the opening, especially in handicap games. This is because a player who has a handicap starts with an advantage so that he can quickly establish strong and secure positions. And strong positions are the key to successful attacks. Here is the fundamental principle of attacking:

If the stones that are used in your attack are weak, they could end up being the ones attacked. Consider Dia. 1.

Black caps with 1 and it seems as if he is building influence in the center while forcing White to run away with 2 and 4. Black keeps up the pressure with 5, but suddenly White plays a forcing move with 6 and jumps to 8, splitting the marked stones from their allies on the left. Black now has two weak groups and it is hard to tell who is the attacker and who is the one being attacked. Both sides are in for a hard fight and the outcome is far from clear. (Taken from Problems 50 and 135.) If Black already had a stone at 8, Black 3 and 5 would be a devastating attack and White would be crushed.

In other words, don't try to kill the stones you are attacking. Chase them, harass them, tease them, torment them, but don't make any great effort to kill them. If it turns out that you are able to kill them, all the better, but don't make that your ultimate goal. Dia. 2 is an example. Black has strong positions at the top and on the right, which he uses to attack the four white stones at the top with 1. White runs away with 2, 4, and 8, hoping to link up with his secure position in the upper left corner, while Black presses with 3 and 7. Note that the value of each of White's moves is zero. In contrast, Black is building influence that radiates throughout the board. Clearly, Black's moves must be good! Black 5 and 9 exploit the aji of his four dead stones in the corner, and Black 11 forces White to defend at 12. Finally, Black plays 13 and his influence dominates the center and works beautifully with his wall below. This is a textbook example of an attack. 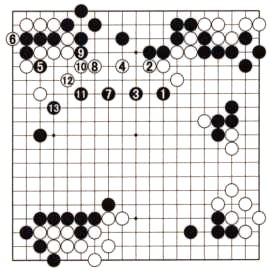 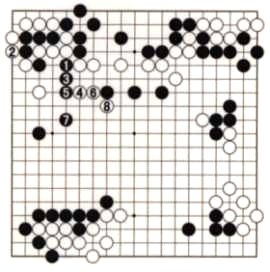 Some players might be tempted to try and kill the white stones with the atari of Black 1 followed by 3 in Dia. 3. But White would threaten the black stones on the left with 4 and 6, then make shape with 8 after Black defends with 7. The black stones in the center are now thin and it is White who has taken the initiative in the center. Black 1 and 3 are completely unreasonable.

The above two principles will go a long way in helping you become an effective attacking player. But it is necessary for you to learn some basic attacking techniques as well.

Attacking with Caps and Knight's Moves

Two of the most common techniques are capping moves and the knight's moves. We've already seen examples of these in Dia. 1, namely, Black 1 and 3 (both are good moves, but Black 5 there is not). Look at Dia. 4 (Taken from Problem 10). 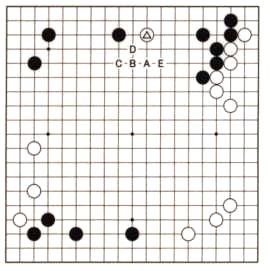 White has just jumped into hostile territory with his marked stone. Black can get a clear advantage if he attacks correctly. The two main candidate moves are A and B, but a lot of players would also consider jumping to C or extending diagonally with D.

The first thing you must do when faced with a situation such as this is to have a clear idea of your goal. It is unreasonable for Black to expect to kill this stone. A reasonable goal would be to let it live, but confine it to the top. With this goal in mind, Black C is rejected because White can jump to A and his stones are out in the open. Extending diagonally with Black D is also not consistent with Black's goal because White again escapes into the center with E.

What about capping at Black A? This cap is the kind of severe attacking move that often succeeds, but here White will be able to break out by extending diagonally to D. Black's stones on the left will become strong and he will secure the territory there. But White will escape into the center and Black's wall on the left will not have been used effectively.

This leaves only the knight's move of Black B. It will drive the white stone toward the black wall on the right, enabling Black to build a wall on the outside and force White to live in gote.

Another attacking technique is the `leaning attack' that is, attacking stones in one part of the board in order to build strength to capture or threaten stones somewhere else. Here is an example. The three marked white stones in Dia. 5 are under siege, but Black's stones are not strong enough to trap them. Therefore, he switches to the top and attaches with 1. If White defends with 2, Black hanes with 3. After White defends with 4, Black comes back to finish off the marked stones with 5. They can no longer escape and they don't have enough room on the right to live. 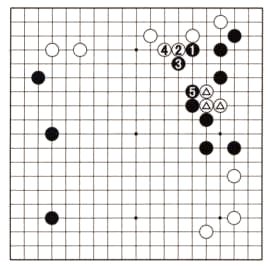 Of course, White might decide to extract his marked stones by turning at 2 and jumping to 4 in Dia. 6. In that case, Black will play 3 and 5, taking the territory at the top right. Black is satisfied with this result. (Taken from Problem 49.)

Depriving your opponent's stones of their base is another effective technique for setting up an attack. Dia. 7 provides an example. 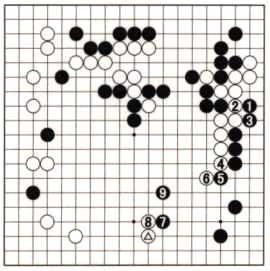 The nine white stones on the right side are out in the center and they cannot be separated. But Black can peep at 1, and White is forced to connect at 2. Black links up to his stones below and the white stones are without eyes. They must now find security in the center, so White expands his presence in the center with 4 and 6. But White 6 is not really sente, so Black can lean on the marked white stone at bottom with the shoulder hit of 7. This move could also be called a splitting or a double attack. Fierce fighting will ensue in the center as White struggles to save his stones above. Black clearly has the initiative.

These are some of the principles and techniques you can use to find the answers to the 136 problems contained in this book.